Now, thanks to six Spanish entrepreneurs, blue wine could be the next big thing.

When we are talking about blue wine, we are really talking about Gik, the first brand of this type, which is best described as a sweet white wine, best served chilled.

It is actually made from a blend of white and red grapes, largely sourced from vineyards in La Rioja, Zaragoza and León north of Madrid, and Castilla-La Mancha to the south.

And when we say blue, it’s really blue. We’re not talking a subtle hint of blue, a mere suggestion of a tint, but a startling, unmissable aquamarine, which is derived from anthocyanin, the pigment found in grape skin, and indigo, a dye extracted from the Isatis tinctoria plant.

Gik’s blue wine is also relatively low in alcohol making it an ideal alternative to those looking for healthier drinks and the millenial generation in particular. 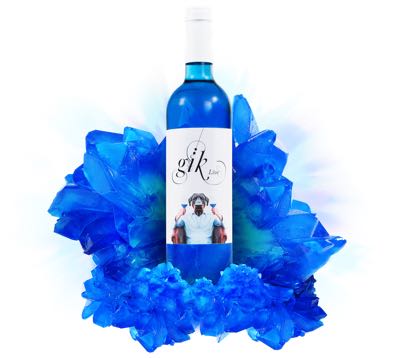 Created by Iñigo Alday, Imanol López, Jen Besga, Gorka Maiztegi, Aritz López, and Taig Mac Marthy in Spain’s Basque region, in a partnership with the University of the Basque Country, and Azti Tecnalia, the food research department of the Basque Government.

The wine took some two years of research and development to come to the market.

It is now available in Spain via the company’s website, but will soon be on sale in France, the UK, the Netherlands and Germany. And after that, the company has their sights set on the US market.

Despite having no winemaking experience between them, co-founder Aritz López and his partners said that they “wanted to create something really innovative.”

Wine for the masses

The team collectively felt that Spain’s wine industry was “missing a little revolution.”

He continued: “We were raised in a country with a strong wine culture, but wine has always been a beverage put on a pedestal. So we thought about how it would be to have real people making wine for real people, not a wine made by experts to pseudo-connoisseurs.”

The inspiration for the blue colour came from a book called Blue Ocean Strategy, written by a Korean-born business expert, who claims that blue represents “movement, innovation, fluidity, change and infinity.”

Ultimately, López is hoping to tap into a new generation of wine drinker who are looking for a unique wine experience.

“We do not believe in wine tasting rules and we don’t think that anybody should need to study the bible of enology to enjoy a glass of wine. That is why we made an anti-technical sheet,” it states on the company website.