Home Food Easy, tiger – the nut that’s not a nut

“Tiger what?”. Whatever it is, it’s not a fad involving an illicitly harvested part of an endangered species.

We’ve known about this little curiosity for a while, but it wasn’t until last year that the tiger nut really caught our attention again once they began being touted as the next superfood. As the popularity of tiger nuts grow, we’ve decided to investigate these humble ‘nuts’, which have been a part of many culture’s staple food for millennia.

The tiger nut, ‘nut grass’, or even ‘earth almond’ as it is sometimes known, has been grown for literally thousands of years throughout Asia, Africa, the Middle East, and Southern Europe. Spain, Valencia in particular, is ideal for growing tiger nuts thanks to its sandy soils, warm winters and hot summers.

When is a nut not a nut? 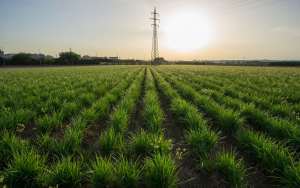 The tiger nut originates from the humble ‘sedge’ family of plants, which are essentially grasses and rushes. In short, it’s a tuber and needs to be dug up.

The raw product once dried is a tough little ball that looks a lot like the kernel of a nut. The ‘tubers’ are dried in the sun and rotated daily, a process that can take up to three months. From there it has many uses: they can be consumed raw (softened in water first), roasted, dried, baked, ground, or processed into milk or oil.

Highly fibrous and quite sweet, tiger nuts are a popular snack in West Africa, and are used in some countries as an additive to bakery products, used to make jam, nougat, and soap. The oil made from tiger nuts is high (82%) in unsaturated fatty acids, such as oleic and linoleic acids. Combined that with moderately high levels of phytosterols, high levels of vitamins E & C, you have yourself a powerful and highly beneficial, all natural food source.

The fountain of youth?

Well, probably not, but it does make you wonder. Its high vitamin E levels mean it’s a great antioxidant which helps slow ageing effects in the body. The Victorians certainly knew about it, because the doctors of the time prescribed it under the latin name of ‘bulbuli’, for the treatment of flatulence, diarrhoea, dysentery, debility and indigestion.

Given that milk has been produced from tiger nuts in parts of the middle east, like Egypt, for thousands of years, it does make one wonder if it really was asses’ milk Cleopatra bathed in for its believed beauty and restorative healing powers.

Visit parts of Spain, particularly Valencia and the impact of the humble tiger nut can’t be ignored. It’s a major economic force in the region. One of the best known products derived from the tiger nut is ‘horchata’. It’s a sweet milk. It’s processed simply by rehydrating the tiger nuts with water and blending them. The blend is then strained through muslin and is ready to serve. Some like to add a touch of agave and a pinch of cinnamon before serving. Either way, it’s delicious and refreshing on hot summer days.

Where to get Tiger Nuts

You might find the raw tiger nut hard to get in the local store, they are however, readily available online, as are the many different drink products. Be careful not to confuse the tiger nut horchata with the Mexican or south American versions, as these use rice as their base.